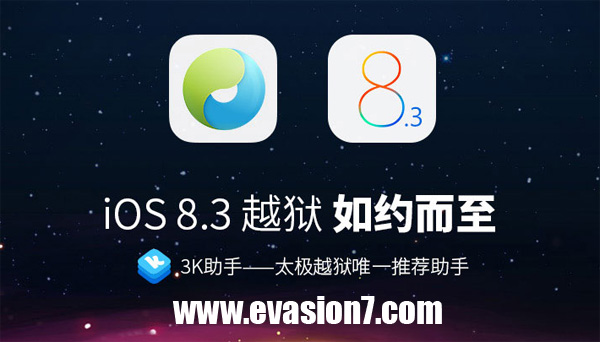 Prepare your iOS 8.3 device for jailbreak

Before start iOS 8.3 jailbreak process with TaiG 2.1.3, be aware that you have prepared yourself and the device properly. It will keep you from unexpected data loss and crashes.

Although TaiG released the jailbreak for iOS 8.3, Cydia wasn’t working properly on jailbroken devices. We were assuming that Saurik had to upgrade the Cydia substrate to be compatible for iOS 8.3 from his end. But Saurik has noted that his should be have to done by the TaiG jailbreak team because it was a problem of patching the kernel properly. Immediate thing to happen is TaiG team release Taig 2.0.1 as an update with proper kernel patching. It’s better to wait for the upcoming Taig version to jailbreak iOS 8.3 devices. There’s no time prediction for the next update but it has to be happen soon for Cydia fans ake use of new jailbreak.

Although you can jailbreak iOS 8.3 using Taig 2.0 sometimes jailbreak might terminate the device warranty. You can alternatively try Cydia demo for iOS 8.3 devices if you are not sure whether you want or not jailbreak your device exactly. Our Cydia is compatible with any iOS device up to iOS 9 beta versions without jailbreak. It’s only a simulation of real Cydia interface but you can have a an idea before get into iOS 8.3 jailbreak.

As usual scammers are raising for jailbreak iOS 8.3 because there’s no real solution for it. They might push you to purchase fake tools, complete surveys and etc. Remember that Jailbreak is always free. You will not have to pay a penny for a real jailbreak tool. But occasionally you can purchase memberships and resource packs related to jailbreak and Cydia if you think they are really worth.

iOS 8.3 include many improvements including 30+ security fixes. It also have Wireless connectivity feature for car play which connects your device to the vehicle head unit via Wi Fi. But as we know so far, upgrading to iOS 8.3 is not healthy for jailbreak lovers. We have more hopes about jailbreak iOS 8.2 than iOS 8.3 due to less security fixes and exploit patches. You can stay at the current iOS version until someone jailbreak iOS 8.3 if you currently don’t have big troubles about performances of your device.

iOS 8.4 Jailbreak is also on the way

Well known jailbreak developer Steffan Esser or mostly known as i0n1c has released a video about Jailbreak iOS 8.4. He’s showing an iPhone 6 jailbroken and running Cydia properly. That clues the Jailbreak 8.4 is will be available as soon as Apple release iOS 8.4 for the public. Most probably i0n1c’s tool will be capable of jailbreak iOS 8.3 also since same vulnerabilities should exists on both iOS versions.

We can’t predict anything exactly about jailbreak iOS 8.3. As you know both of previous iOS updates are still remaining unjailbroken. Best thing to do is avoid upgrade your device into iOS 8.3 if you are not having any trouble of using current iOS version on your device. Also remember that Jailbreak is completely legal and reversible process but you might terminate re seller warranty in certain situations. Please refer your warranty guideline if your device is still under warranty period.