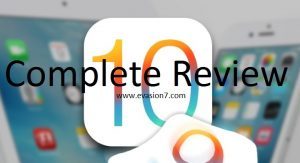 Apple has just announced the next generation mobile operating system, iOS 10 with lots of features, smaller movements and some improvements. It is still unveiled for developers and public beta testers so soon. The tenth version of apple's mobile operating system will be available for everyone to download in September as some reviews. Apple has described about iOS 10, it is the … END_OF_DOCUMENT_TOKEN_TO_BE_REPLACED