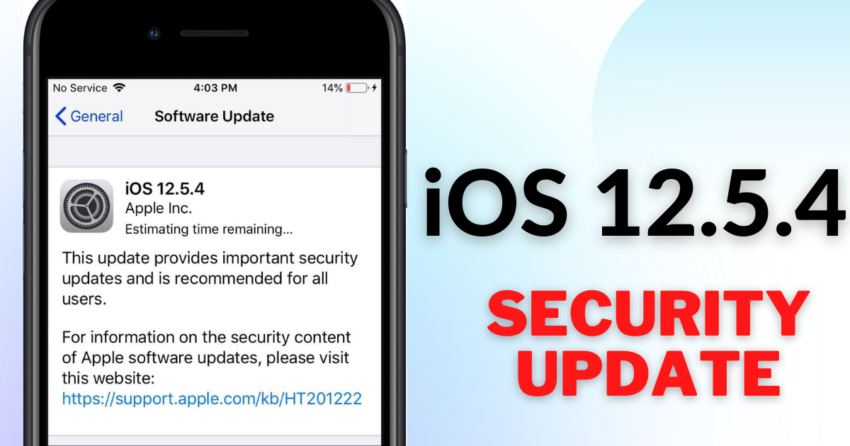 iOS 12 brings performance enhancement and exciting new features to the iPhone and iPad. Guys, those are old stories, today I bring good news to old iPhone users. If you’re still using an Apple device running iOS 12, Apple is releasing an essential security update that fixes three vulnerabilities. If you have an older iPhone or iPad, you should download iOS 12.5.4, which includes a variety of “major security improvements“.

It should keep your device safe and secure from hackers. Apple lists three vulnerabilities corrected in iOS 12.5.4, including two WebKit defects that “may have been actively attacked.”

The patch pointed out two WebKit vulnerabilities and one “maliciously created certificate,”. According to Apple’s release notes, all of which might lead to arbitrary code execution.

Apple also claims that the two WebKit vulnerabilities have been extensively exploited. So anybody with an older iPhone device should get the update. The certificate flaw was also addressed in iOS 14.6.

If you are wondering if your Apple device is compatible with iOS 12.5.4.  The company on this support page mentioned the device list. If your iPhone or iPad is newer than the one below, you should download the latest version of iOS 14 instead:

Installing an iOS or iPadOS update on your iPhone, iPad, or iPod touch is now as simple as it gets. Go to Settings > General > Software Update and press the “Download and Install” button at the bottom of the page. You may also install an update via iTunes by connecting your iOS device to your computer.

Regardless of the method you choose, be sure to back up your devices before installing the update. You can’t always be too caring!

Companies are not required to maintain security upgrades for older devices. Many don’t after a certain length of time, usually 2-5 years depending on the product, which is hidden in the tiny print.

This particular set of Apple devices no longer received new features after the release of iOS 13 in the autumn of 2019. Yet they are still theoretically working.

Overall, virtually all of these devices released in 2013 or 2014, making them six or seven years old at this time. (The 6th generation iPod Touch is the “newest,” having debuted in 2015.) These are very antique by today’s standards.

You may be wondering, who still has an iPhone 6 or 5S?

Apple’s iPhone 5s  and 6 are now tied for the longest iOS-supported iPhone in company history. The record was previously held by the 2013 iPhone 5s. 5s made it all the way from iOS 7 to iOS 12 before being abandoned with the introduction of iOS 13.

In general, we advise customers to upgrade when their device is no longer able to support new software due to aging hardware or when updating to new software is more bother than it’s worth.

We strongly recommend updating when a company no longer provides security updates. That said, Apple is happy to continue to provide these updates for users who are unable to upgrade as Apple devices are as expensive.

Should I update my iPhone?

As a rule, your iPhone and major apps should still work fine even if you have not updated them. If you find your apps are slow, try updating to the latest version of iOS to see if that fixes the problem. On the other hand, updating your iPhone to the latest iOS may cause your app to crash.